Today was an amazing day. Actually it was probably the most exciting day of the year for me. Today was Vegfest. Ok, to be honest, it was yesterday. I’m writing this post late because I was so tired yesterday.

We got on the train at 9.30 in the morning, where we met some friends who were going too who got on a couple of stops before. After a trainride of a little over two hours we got at VegFestNL at noon. My job was to take pictures of the food demos, vegan awards and inbetween a bit of the market in general.

I still had an hour until the food demos started so I had a look around first. We did a round of shopping. My partner bought the shopping bag, which (loosely translated) says “animal friendly/humane meat does not excist” On it are my band (which I could get of because my hands are tiny) and a tub of nutritional yeast, so I don’t have to go to the health food store for it, because I always buy too much there. 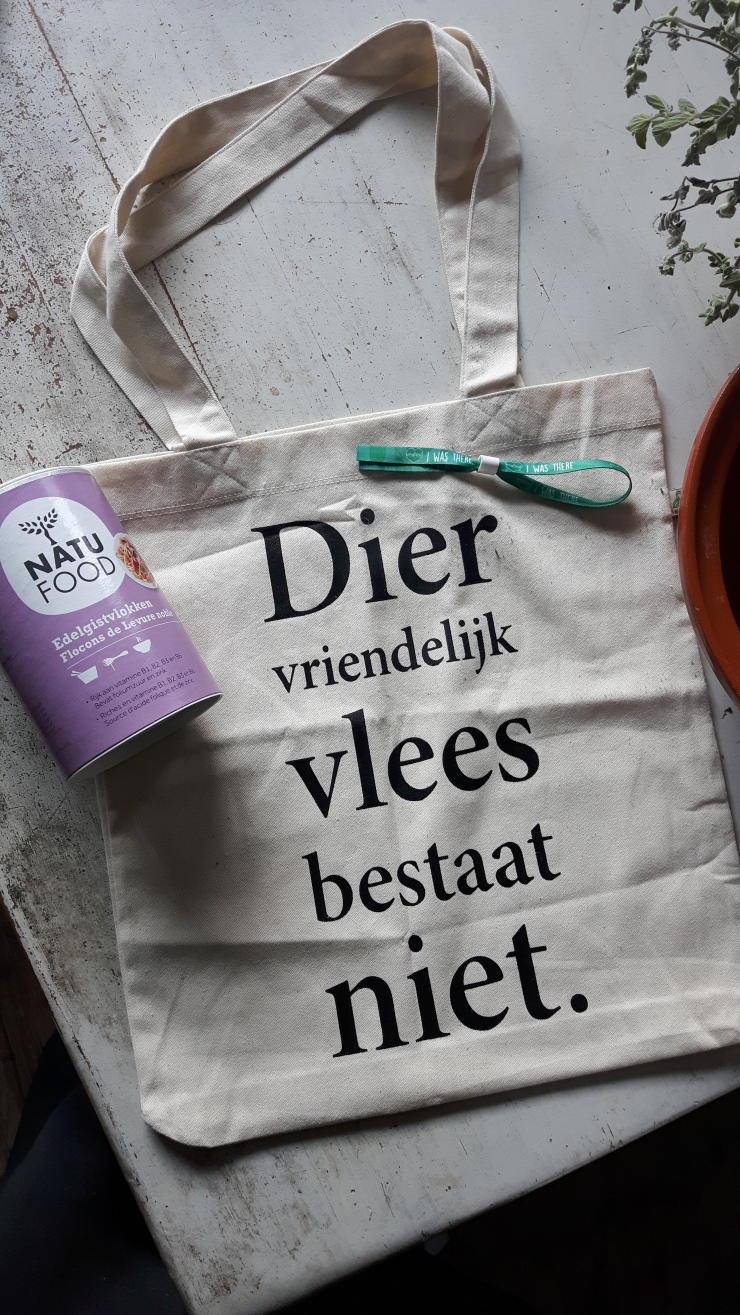 Oh, meet my partner! For some reason he is ok with me using pictures of him as long as he approved them first even though he doesn’t want his name on here.

Did I mention I’m a horrible blogger? I keep forgetting to take pictures of my food. 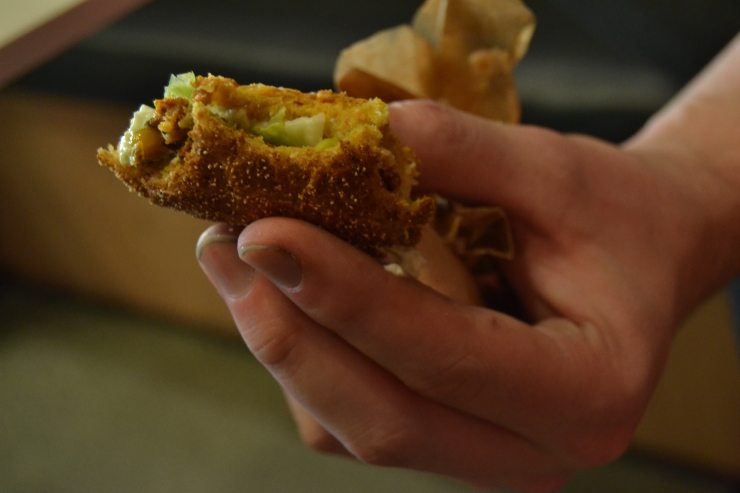 This was the last bite of Seitan Chefs’ take on Mom’s chiliburger by Just Like Your Mom. Honestly I liked it more like this, the sauce was amazing, super creamy yet light and not as much cilantro (yeah, I don’t like it, don’t judge me).

Then it was time for some actual work… It was a long day on my legs, but I managed to take a lot of pictures. This was during a demo by Veggies on Fire. 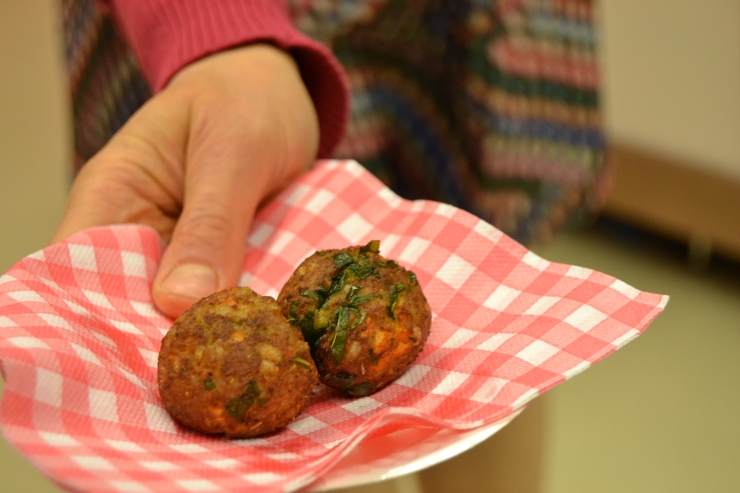 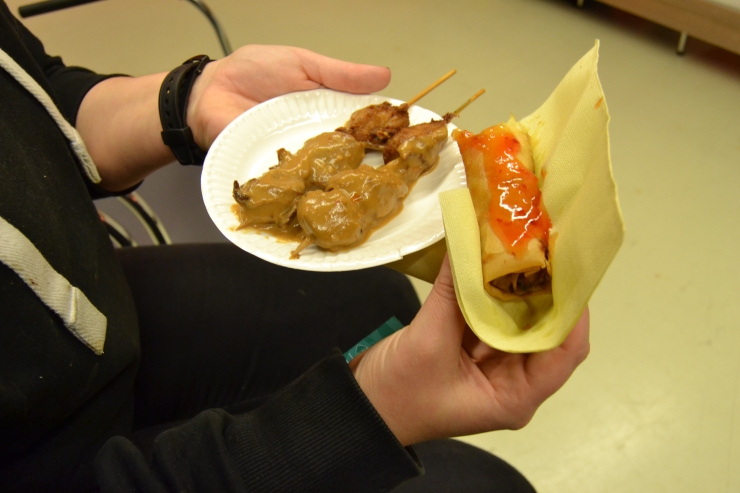 I actually got two more of those satay skewers later that day because they were so good. That’s me by the way.

Then more demos, people, food, people, demos, food, food, people, food and people. Did I mention the people? Lots of old collegues and  distant friends. It’s always so great to see them. Oh, yeah I’m avoiding pictures with people (or at least where they can be recognised) because they may not want it.

I got these amazing cupcakes and donut from Heavenly Cupcakes. I took these home, because I couldn’t possibly eat it all.

The day ended with the Vegan Awards, but first I quickly had to get a Dutch Weedburger (no, not cannibis, it’s made with seaweed), but of course I forgot to take a picture again. The Vegan Awards had 7 categories: best blog/vlog, best (web)shop, best restaurant, best caterer, best cookbook/lifestyle book, best vegan product and best newcomer. Honestly I don’t even remember who won them.

Just before I went home Heavenly Cupcakes decided to give their leftover cupcakes to the volunteirs, so I got to take home all of this goodness: 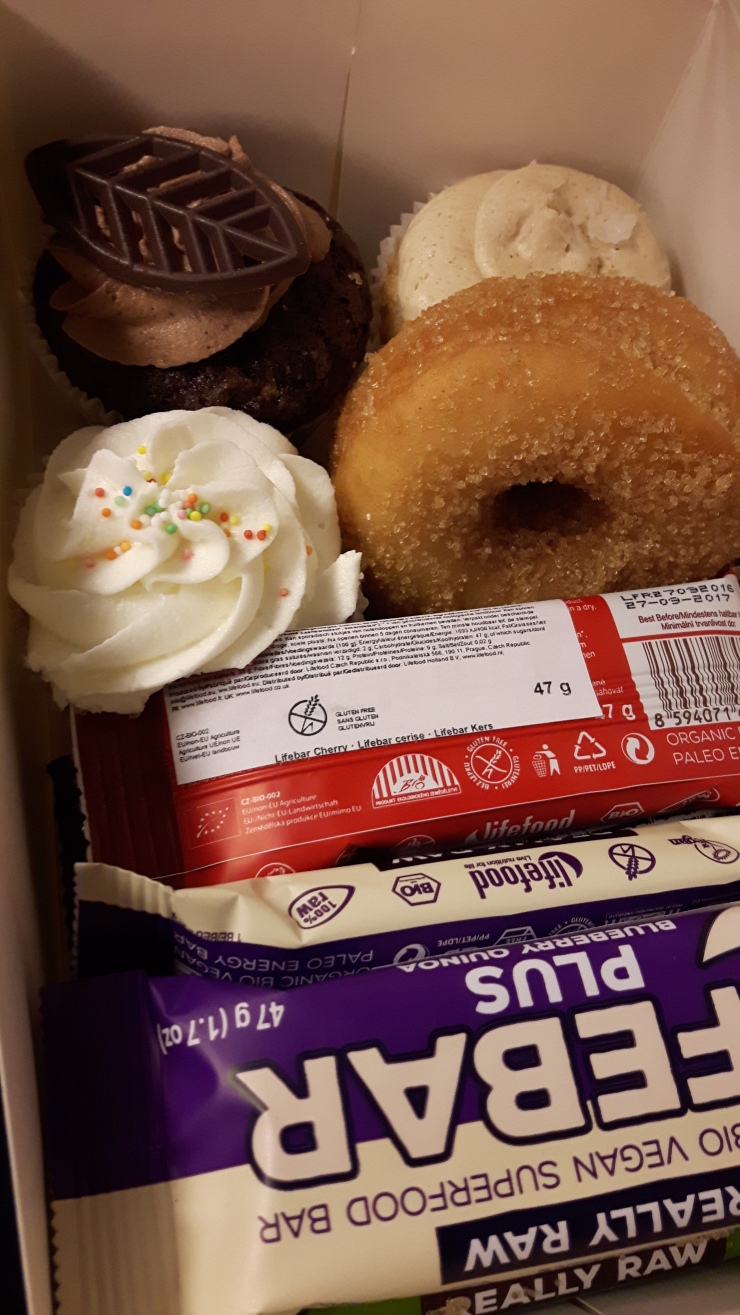 Oh and the bars I got to take with us on the family weekend two weeks from now, because they just ignore the fact that we don’t eat anything that comes in our path. I ate the donut on the train back, but kept the cupcakes for monday morning.

So that’s it for VegFestNL, I can’t wait untill next year. It’s exhausting, but 5000% worth it. See you tomorrow!