If you have been following my blogs lately you’ve already made it through half of my blogmas. Today is already day 12. I feel like blogging is actually starting to become part of my routine.

Ok it’s actually an old picture, but I love this oatmeal.

It’s half a cup of oats, 1,5 tbsp of sugar (I know that’s a lot, I like my oatmeal sweet, but oatmeal with 1,5 tbsp of sugar is still quite a bit healthier than most cereal), half a cup of soymilk, 1 cup of water and 1,5 cup of frozen berries. Add all the ingredients to a pot and cook until the oats are soft. To serve pour a splash of soymilk on top and sprinkle with some chocolate chips or cacao nibs (optional).

Today I found out we somehow had more grocery money than I thought so I went out and bought some convenience products for the busy holiday period, which starts this weekend for us by the way. 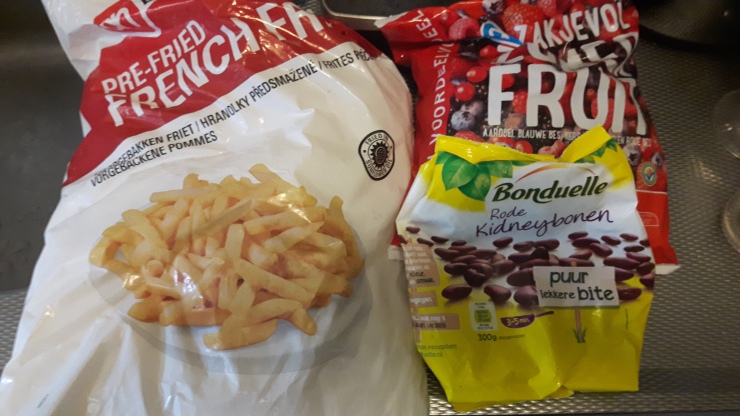 So yeah, this grocery haul was expansive as fuck. Also, sorry for the phone pictures today, I’m still not feeling too well, there’s improvement though, so at least that’s something. The first picture is all the frozen stuff. We have fries and vegan nuggets for monday, because I probably won’t have any energy to cook after a long weekend with my family, most of whom don’t know I’m trans, so that’s going to be fun. I got more energy bars for on that weekend, because we’re stuck with a bunch of meat eaters who’ll eat anything they can get their hands on while we go hungry, so no hunger for us this time. A ton of hummus, because it’s convenient as either a sandwich spread or a dip. Oatmeal, raisins and apples for my breakfast while we are out, because if we’re going to be out all day I need a good breakfast. Speaking of going out all day, my family probably wants to go to a zoo, explaining to them that we don’t want to go is going to be fun… Is it too obvious I’m not looking forward to this weekend?

Anyway, back to food. I found some new vegan oreo flavours, so I just had to stock up. Omg, I love the mint ones so much! My patner isn’t that into chocolate and mint though, so I got him the chocolate ones. I still can’t believe the chocolate ones are vegan but the peanut butter ones aren’t. Then there’s more meat subs, because I’m lazy. A ton of pasta. Pasta have been my go to lazy food lately. Honestly I never really liked pasta, but ever since I made my own pasta sauce I’ve really come to appreciate it. Coconut oil because it was somehow both cheap and organic. Pancake mix and sugar syrup because of the obvious reasons. Biscoff and peanut butter are both great with apples (can you tell I’m not a bread person). I think that’s pretty much it for the grocery haul.

Lunch was a simple stir fry.

Honestly it looks better than it tasted though. Even though the ingredients worked, I guess I just can’t cook properly when I’m in a mood.

I had very little energy in the afternoon and I generally wasn’t feeling too well, but this little guy tried to cheer me up.

He gets really salty whenever I take pictures of him though. I rewatched an episode of the You’re so brave podcast. If you don’t know it you should really check it out, Chase and Aaron are great.

Dinner was pasta, which I somehow managed to screw up. Why do I screw up super simple things more often than harder things? It’s weird.

While we had dinner we watched the new episode of You’re so brave. My partner loves it just as much as I do, so every week we take the time to watch it together.